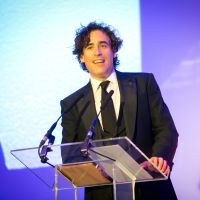 Stephen Mangan is an acclaimed actor who has appeared in some of the UK’s best TV comedy of recent years, including Episodes, with Matt LeBlanc. He's also a popular and frequent host of Have I Got News For You. Stephen came to prominence with his role as the delusional and hilarious, un-PC anaesthetist Guy Secretan in the hit Channel 4 hospital sit-com Green Wing. His on-screen double act with Julian Rhind-Tutt was one of the show’s high points and they carried their characters from the hospital to various locations around the world in a series of Barclaycard ads. Since then Stephen’s natural ability with a range of comic characterisations has seen him star in shows including I’m Alan Partridge (people still shout ‘Dan!’ at him), Free Agents, Dirk Gently, Adrian Mole: The Cappuccino Years, and The Armando Iannucci Show. He’s also portrayed Tony Blair twice in separate Comic Strip films, and played Arthur Conan Doyle in ITV’s Houdini and Doyle. He also co-wrote and starred in the psychotherapy comedy Hang Ups, and the Sky sitcom Bliss. A RADA graduate, he has also taken on more serious stage roles in the West End and in touring productions, including The Tempest, The Norman Conquests, and Hamlet. He starred in the acclaimed BBC drama The Split, and has also appeared in a number of films including the James Hunt/Niki Lauda biopic Rush, Beyond the Pole, Confetti, and Billy Elliot, and he was even the voice of Pat in Postman Pat: The Movie.

#STEPNews: a will drafted by the late Steven Cooper on his computer in March 2018 has been accepted as valid by the… https://t.co/5by2UewzUu